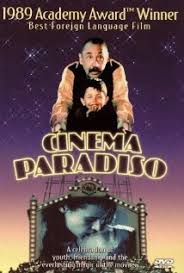 Wonderful…one of the great films I watched…

It was originally released in Italy at 155 minutes, but poor box office performance in its native country led to it being shortened to 123 minutes for international release; it was an instant success.[1] This international version won the Special Jury Prize at the 1989 Cannes Film Festival[2] and the 1989 Best Foreign Language Film Oscar. In 2002, the director’s cut 173-minute version was released (known in the U.S. as Cinema Paradiso: The New Version).

Shot in director Tornatore’s hometown Bagheria, Sicily, as well as Cefalù on the Tyrrhenian Sea,[3] and told largely in flashback of a successful film director Salvatore to his childhood years, it also tells the story of the return to his native Sicilian village for the funeral of his old friend Alfredo, who was the projectionist at the local “Cinema Paradiso”. Ultimately, Alfredo serves as a wise father figure to his young friend who only wishes the best to see him succeed, even if it means breaking his heart in the process.

Seen as an example of “nostalgic postmodernism”,[4] the film intertwines sentimentality with comedy, and nostalgia with pragmaticism. It explores issues of youth, coming of age, and reflections (inadulthood) about the past. The imagery in each scene can be said to reflect Salvatore’s idealised memories about his childhood. Cinema Paradiso is also a celebration of films; as a projectionist, young Salvatore (a.k.a Totò) develops the passion for films that shapes his life path in adulthood.