I would like to share my nephews musical production of The Drowsy Chaperone at Hart High School. He was cast as Aldolpho in the play.

The Drowsy Chaperone is a musical with book by Bob Martin and Don McKellar. Music and lyrics by Lisa Lambert and Greg Morrison. It is a parody of American musical comedy of the 1920s. The story concerns a middle-aged, antisocial musical theatre fan; as he plays the record of his favorite musical, the (fictional) 1928 hit The Drowsy Chaperone, the show comes to life onstage as he wryly comments on the music, story, and actors.

What do you think? 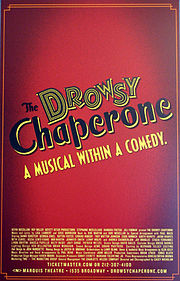 8 thoughts on “I am Aldolpho!”