Her renderings of her subjects embody whimsical and playful presentation of colors. Strong portrayals of mixed cross-cultural elements can also be observed. Avid or not, she so strongly emphasizes the masks behind human existence, like imprints that lack the shadows, and depth of gradation challenged by man’s inability to love and hope. The interplay of colors represent irises ceilings men build their foundations on, that is a life of fantastical sheer joy and full providence sans suffering. The brighter her art, the sadder and more melancholic she is. An extreme opposition to what many critics think that bright hues, shades or tints manifest happiness equivocal to its thesauri synonyms.

Heidi Rodriguez is a self-taught artist who is highly influenced by Afro-Asian and Mexican Art. She mentored in the university for 14 years but left the world of education because of extreme politics and unchristian ways. Crippled for three years because of a neuro-muscular disease during her teaching career, she devoted her time painting after being declared an invalid for life.  Despite her trials and tribulations in life as a single parent raising an only son, her illness and being a full time artist; she managed to rise from the ashes.  She is what I call,  Freda Kahlo of the Philippines.

Get to know how Heidi’s paints her dreams via Jenny’s Serendipity set of interview questions.

Can you say that your paintings through the years are the fulfillment of that dream considering you studied AB in English?

Well, yes and no.  My dream as a child was to be become a very happy painter.  For some reason, that did not materialize. Painting through the years became my therapy.   I tried to painting as a form of a balm for human suffering, an escape to reality.  The late Santi Bose once told me that painting was not existentially provident but passionately fulfilling.  He gave me an advice to finish school then pursue art when I finished.  So I took an AB English course initially in preparation for law school which did not also materialize. Thus, I ended up teaching and taking units in education and a Master’s in College Teaching.  In Painting however, to create something after hours of labor is as fulfilling as holding a diploma in your hands because it affects people in many ways.

How is it to be a college teacher?

Teaching in college was great and fun. It had its downsides like “Hitlery” bosses, deadlines, stress and its likes. In the same manner as my students learned, I did too—loved my students.  I taught in Saint Louis University and aught art in the subjects humanities and Literature only to liberal arts and humanities students of all courses, except fine arts students as there were no course offerings in our school in regards to fine arts offerings.

You mentioned that you got ill, which was a factor of you leaving the academe. How did this change you and lead you towards working more as an artist?

The illness I had was a combination of nine illnesses, a neuro-muscular disease that led me to be crippled and had tremors likened to arteriosclerosis and initial stages of Parkinson’s disease. I underwent therapy and by God’s grace was able to overcome it.  It was impossible to paint with a trembling body.

Other than personal reasons, I felt the calling to move on in life.  I believed it was time to pursue another career that did not feed on my time and freedom.  Teaching became mandatory, commandeering, mundane and mechanized it was no longer a happy place to be in 8 hours daily from Monday to Saturday.  It was no longer psychologically, spiritually, morally, and emotionally healthy to stay in that environment.

It was difficult at first.  After all, 14 years was a long time to adjust.  Honestly, I had to get adjusted to my finances at first.   It was a struggle.  But painting for some reason healed me and my family.  My paintings brought certain joys money or even a degree can never buy. It fulfilled the soul.  Entering the art world was a challenge; some artists found my work against their tastes but many did accept me.  I gained new artist friends and some become close friends.  I paint to keep myself sane and be free from inhibitions in a morally heartless and callous world.  In the world of painting there is peace and harmony for the soul.

Why did you say were your works criticized for being unrealistic? Has fantasy played a huge role in your work?

My works have always been criticized for lacking depth and gradation, swimming in color, and my human figures are dis-proportioned and against realism.  Many other artists say they look like cartoons, animations, and amateurish.

Perhaps you could say I have a strong inclination to the fantastical and children’s literature.  My works manifest elements from legends and myths like dragons, mermaids and fairies.   Perhaps influenced from my literary influences like Edgar Allan Poe, William Shakespeare, Virginia Woolf, Edgar Allan Poe, fire side poets, Guillermo del Toro and Stephen King . My works show swirls of incandescence reflecting infirmities of the flesh….iridescence of psychoses of the soul….vexations of the human spirit in surreal worlds oozing with neurosis collide in my art.  A carnival of surreal flatulence, dreamscapes, and magical emporiums that traverse reality are strongly imprinted in my canvas.  Judged for its brilliance in color, strong lines, eccentric lack of depth, strange mirages of composition, and often flooded with whimsical little elements is plotted together in my canvas.  I have always deviated from the doctrine that universals have a real objective existence specifically in presenting my subjects.  Often, my art has been shunned for its unrealistic representations and execution. My renderings of my subjects embody whimsical and playful presentation of colors.  Strong portrayals of mixed cross cultural elements can also be observed. 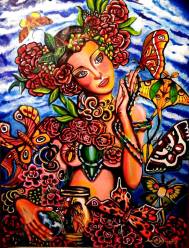 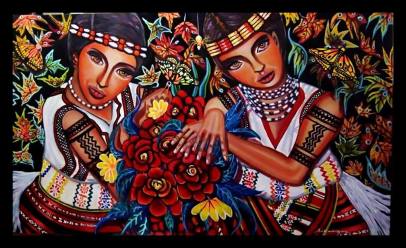 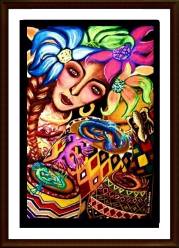 What are your best works throughout the years and why?

This is a tough one.  I am not particularly sure which are best because every time I finish an artwork I see it to be not good enough.  There is one I like though since I call it my “laboratory petri dish” it birthed all my works at present. It is an Engraving on my mother’s sewing machine of a modern day Honda car.  Such engraving got me whips for branding a brand new sewing machine when I was three.  The tiger and koi fish would follow suit and my studies of Frida Kahlo.  Animals hold a special place in my heart for they are kinder than humans in certain ways.  Animals teach us a variety of feelings which some humans are incapable of.  My works are menageries of animals and plants as I try to reconcile co-existence and unity with the universe in an evil world.

I have always favored my “Marrionettes”, “Red Moon Rising”, and “Vexing Thoughts”.

You are now a full-time painter? How does your pending PhD work with your future plans?

Yes, I am now a full time painter.   I finished some units in my pursuit in taking a Doctorate in Educational Management.  At the moment, I have no future plans of pursuing it perhaps in time.

Coming from Saint Louis University and Benguet Mountain Province, are there touches of local color from the mountain province that you showcase in your creations?

The atmosphere maybe but for some reason I had a hard time trying to embed my paintings with vignettes of the same as my influences are not Cordilleran.  Although some tribal art is found in some of my works, being a Tam Awan artist requires that my paintings should contain aspects of the Cordillera.  Mine is tweaked a bit adding bits of fantastical fun.

Are you exclusive painter now to your full-time employer or are you allowed to sideline and paint for other people? What is your specialty when painting?

I am independent usually but is a member of Tam Awan Village Artists in Baguio.  Yes we are allowed to have sidelines.  I specialize in conceptual fantasy art usually.

Do you plan of going back to the academe after you finish your doctoral degree? What are your long-term plans, in so far as painting is concerned?

Perhaps, if God wills it.  But this time, in the line of art.

I hope you could come see our Ayala exhibition this January and Baguio Museum exhibition in February.

All images are courtesy of Heidi Rodriguez who goes under Ignis Airie in Facebook.