All Ginny’s paintings and artworks have been categorized in specific albums as indicated in her Art by Ginny page. For example: Fashion Sketches, Faces etc. She has an interesting story to tell because although she took up Fine Arts and did use what she studied as a profession for quite a number of years, there was a long period that she totally stopped because she shifted career paths. She became an editor of three different magazine titles so she was in media before becoming a PR practioner. A job she holds up to the present time. So she stopped making Art for 15 long years. It was only in 2012 that her original passion for Art was rekindled. So this is a whole revived thing she is into again which she knows will be her direction for the rest of her life.

Your portraits are so beautiful! How long have you been doing this? How many seminars, conventions, workshops, contests and exhibits have you participated in?

I started drawing when I was a child. I remember having drawing sessions with my older sister in my room every afternoon during summer time or when we were not in school and female faces were always my subject. Female faces or figures that I would dress up differently in each of the drawings. I remember participating in art contests in high school in which I’d won a couple of times, and in college I also joined the Shell National Arts Competition and at one time received a consolation prize for a woodcut lithograph. In the States, where  I took up advanced courses in drawing and painting in Corcoran School of Art, Washington D.C., I won “Best in Drawing” and “Best in Watercolor” for their Spring Competition. The subject for the artwork I drew in pencil was a mechanical Iguana! And the one in watercolor was a nude painting. I’ve participated in some exhibits in the 90s but they were always group exhibits. I’ve never had a one-woman show yet. It’s a goal.

Which do you like doing best – drawing or painting?

Both. To me, basic drawing is the most important foundational key for an artist. Even the late, great Picasso started with realistic paintings in his early years before he evolved into other theories, ideas, concepts and styles like Cubism. I am “old school” when it comes to drawing. It saddens me that many artists of today who depend solely on the computer but who can’t even draw a single straight line by freehand or who can’t even shade properly with a charcoal pencil compare themselves with the league of artists who can draw by hand. Just like digital photography nowadays. Anybody can take a snapshot with a point and shoot cam, or thru one’s own celfone, but not everyone can shoot a real beautiful photo with the right lighting, drama and composition as a true photographer. Don’t get me wrong, I have nothing against all this new technology. I’m just saying and encouraging young people who want to take art seriously, to not take any short-cuts. They have to know how to draw by hand. It’s a must.  Therefore, the right order of things is, learn how to draw first, then learn how to paint. 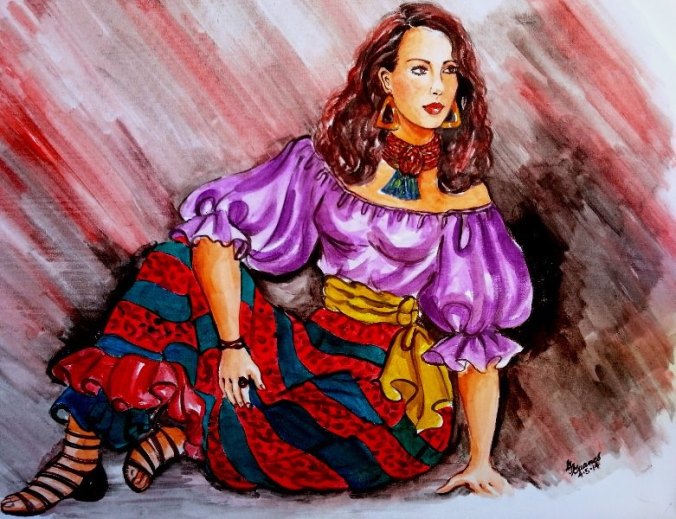 What are the most frequent materials you use in your art?

Just plain pencils for sketches, watercolor or acrylic for painting.

Do you prefer face portraits among others?

Female faces in general, yes. And figure painting with a touch of fashion. I mix myFine Arts background and my influence in fashion illustration.

How do you juggle this with your PR job?

Who are or what do you look up to that led you to pursue painting? Your influences? Idols? Favorite art that inspired you?

Art has always been my first love. I took up Fine Arts in College, pursued advanced lessons in Painting and Drawing after college in the States. This was in the 70s. I worked as an art teacher in the 80s, learned Fashion Illustration in between, got into writing as well, eventually becoming a part of media in the late 90s when I shifted career paths and took on the job of editor of two magazines and a broadsheet. Then I shifted to PR from 2002 to the present. I had totally stopped drawing for 15 long years from 1997 to early part of 2012. It was only in March of 2012 when my love for art was rekindled. The death of my ginger cat, Simba woke up that part of me which I had set aside for 15 years. But I soon realized the fire and passion never left my heart. I’d just stopped practicing for 15 years. So when it was revived, I felt like I was re-united with a long-lost love. And I never stopped since.

One of my “idols” in the 90s was Edgar Degas, the French Impressionist painter. I’d always been fascinated with his ballet dancer paintings and so I sort of followed thru with this subject in my first group exhibit and did a Ballet Dancers series in watercolor. I was particularly impressed with the fluidity and grace of their movements which added interest to this subject.

Is there anyone else in your family who’s into art? Did you inherit your love for it? Do you have kids who manifest the same passion or interest?

In our family, my older sister was my first influence in drawing. I mentioned earlier that as a kid, I used to have drawing sessions with her most afternoons during summertime.  However, she turned out to be a journalist. In my own family, my son has inherited the talent. Although he is into computer graphics, he can draw very well because of his influence in Comic Art.

What is your best work of art and why?

Female figures in general. It’s what I enjoy doing the most.

Who is your most important client? And your most memorable masterpiece? And why?

Everyone who has ever bought my paintings is important. Most of my Ballet Series in the 90s were memorable works because this was the first time for me to join in a group exhibit.

What are your future plans/ projects in art? Are there other art forms that you intend to venture into in the future like handicrafts or other?

When the proper time comes, I would like to go back to art in a full-time capacity. I envision a work-from-home setup. I would most likely continue to stick to the same forte and improve all the more in this area. Even now I get offers to do portraits and I just wished I had more time to concentrate on this. I do abstract paintings too on large canvasses so this can be an avenue for people who have new homes and who need new paintings to fill up their empty walls. I’ve tried arts and crafts but it’s not for me. Tried pottery too but felt it wasn’t my thing. So, drawing and painting will always be there. And who knows, I might still pursue my goal in mounting a one-woman show.

What is your favorite among those you have done and why?

There is not one particular artwork which I count as my favorite. I see to it that each piece I do, I do it with the same passion and intensity. I’ve tried doing several different subjects for the sake of variety but I’ve discovered early enough that I’m more inclined to drawing female faces or female forms. The Ballet series were early favorites because these were my first exhibited paintings. My latest paintings on “Boho Chic” can be considered as new favorites since they are fresh (done only this year), and reflect a great deal of who I am as the artist behind the works. Some still life works done with colored pencils I enjoyed doing as well.

For bookings, you can contact the artist, “Ginny Guanco” via her email ginny_guanco@yahoo.com and Facebook Page. All images are courtesy of  Ginny Guanco.

One thought on “Meet the lady behind Art by Ginny, this woman can paint!” 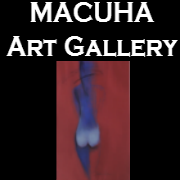 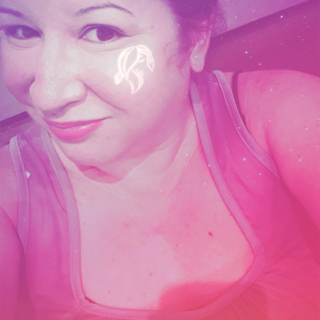