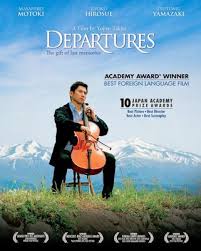 Departures’ — a beautiful Japanese movie about death, grief, and the fleetingness of life.  This movie made me cry so much and also loved the soundtrack

Loosely based on Aoki Shinmon’s autobiographical book Coffinman: The Journal of a Buddhist Mortician (納棺夫日記 Nōkanfu Nikki?),[1] the film was ten years in the making. Motoki studied the art of ‘encoffinment’ at first hand from a mortician, and how to play a cello for the earlier parts of the movie.[2] The director attended funeral ceremonies in order to understand the feelings of bereaved families.[2] While death is the subject of great ceremony, as portrayed in this movie, it is also a strongly taboo subject in Japan, so the director was worried about the film’s reception and did not anticipate commercial success.[2]

In 2011, Roger Ebert added the film to his “Great Movies” collection.